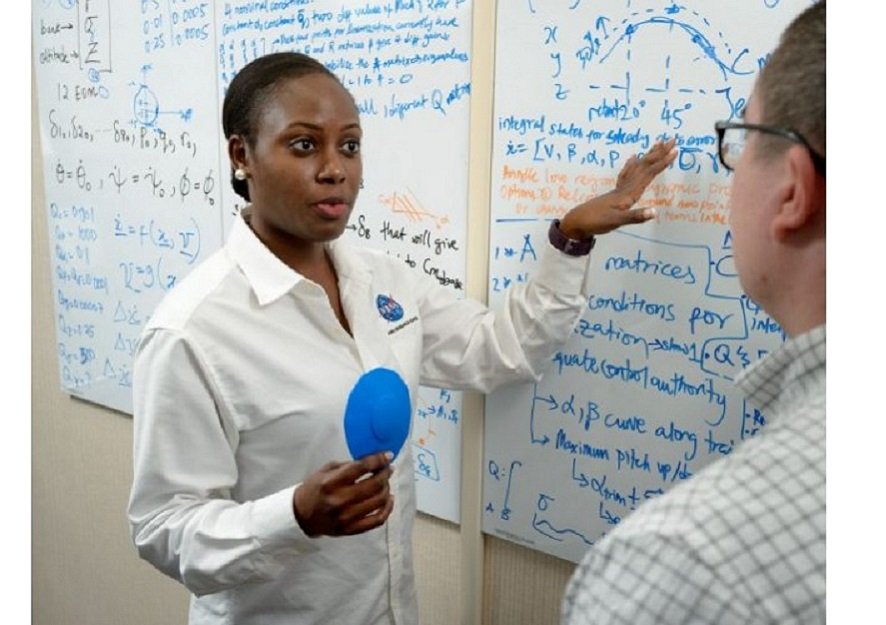 Wendy Okolo initially felt like an imposter when she worked as a summer researcher from 2010 to 2012 at the Air Force Research Laboratory (AFRL), a scientific research organization operated by the United States Air Force Materiel Command.The mission of the AFRL is to discover, develop, and integrate affordable war-fighting technologies for air and space forces.

Working in the Control Design and Analysis Branch of the AFRL – Wright Patterson Air Force Base – Okolo was part of the team that flew the world’s fastest manned aircraft, which flew from coast to coast in 67 minutes.

Okolo, then a graduate student, at first felt she had no place working with such a great team.

“I was like I am sure these guys are so smart, what am I going to bring in,” she said.

She found an error in the code in the systems and she fixed it and “that fixed the impostor syndrome for a while,” she was quoted by The Cable.

Today, the 30-year-old is an aeronautics and space administration genius. She works as an aerospace research engineer at the Ames Research Center, a major research centre for the National Aeronautics and Space Administration (NASA) in Silicon Valley.

Born to a family of six in southeastern Nigeria, Okolo was only 26 when she became the first black woman to get a doctorate degree in aerospace engineering from the University of Texas at Arlington.

She received her BSc and PhD degrees in aerospace engineering from the university in 2010 and 2015 respectively. Okolo said she owes her current feat to her all-time heroes – her sisters – who gave her biology and other science lessons through their everyday realities.

She would subsequently excel in school and make tremendous moves during her undergraduate years at the University of Texas in Arlington, where she became the president of the society of women engineers in the university.

During this period, she interned at Lockheed Martin working on NASA’s Orion spacecraft and first worked in the requirements management office in systems engineering before moving to the Hatch Mechanisms team in mechanical engineering.

Okolo later worked as a summer researcher at AFRL and has since taken off her career at NASA, a United States agency responsible for the civilian space program, as well as, aeronautics and aerospace research.

Having done research in the area of aircraft formation flight as a fuel-saving method of flight, Okolo has written several publications and is currently a special emphasis programs manager in the Intelligent Systems Division of NASA’s Ames Research Center.

She is working on the System-Wide Safety (SWS) project, where she has led the task of predicting GPS faults in drones, according to The Cable. The talented engineer is further working on a Space Technology Mission Directorate Early Career Initiative (STMD-ECI) project at the Ames Research Center.

Under this role, she “leads the controls team to develop unconventional control techniques for deployable vehicles, to enable precision landing and improve maneuverability during the entry, descent, and landing phases of spaceflight.”

Okolo has also worked with Langley Research Center in Virginia to investigate flight data and facilitate data exchange across and within NASA centres.

The STMD-ECI project is a $2.5 million-dollar project that she proposed and won as part of a six-member early- career scientist team.

Okolo, who has also won the BEYA Global Competitiveness Conference award for the most promising engineer in the United States government, wants other young girls to take an active interest in science technology, engineering and mathematics (STEM).

Over the years, Nigerians have been impacting the world with their highly-improvised technical skills.

From the likes of Osatohanmwen Osemwengie, who builds drones for the U.S. Army; the super-talented Nigerian man who designed the 2014 Chevrolet Volt; the Nigerian engineer who built the fastest carburetor front-wheel car in the world all the way to the 26-year-old Nigerian who is now the highest paid robotics engineer in the world, Nigerians have made their country proud with these wonderful undertakings.